INFINIT Head Formulation Specialist and Pro Triathlete Colin Riley, MS, RDN, breaks down the strategy that led him to a new 70.3 PR of 4:12:14 and a 12th place Pro finish.

A couple weekends ago I raced in the Steelhead 70.3 (Half Ironman) in Benton Harbor, Michigan. This was my 2nd time racing at Steelhead but the last time I raced here was back in 2010 where I set my 70.3 PR with a time of 4:16:06. This is my 3rd year racing a professional triathlete and I have dabbled in a few 70.3's over the last couple of years including Chattanooga (2016 and 2018) and Austin (2016 - canceled swim) and just hadn't put together a good half Ironman race in a long time. 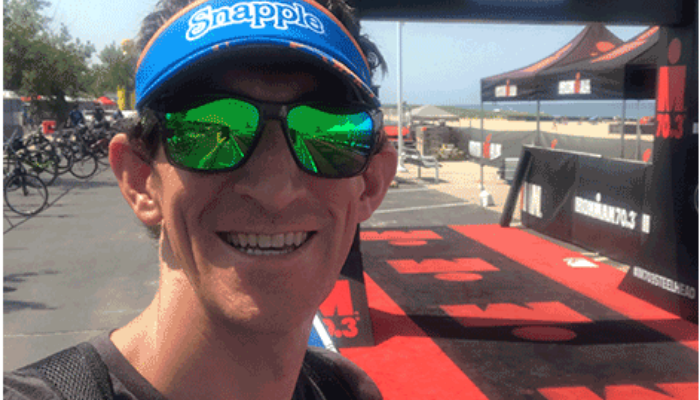 The calm before the storm - day before the race. Pro meeting, packet pickup, and checking out the transition area.

Race morning rolled around and it was an early 3:50 am wake-up. I had dialed back my caffeine consumption race week with practically no caffeine intake on Friday and Saturday prior to the race so I was excited to make a French Press and drink some good tasting coffee again and get some caffeine back in the system. I had stayed about 40 minutes away from the race site so on the drive in, I ate two packets of oatmeal along with probably 2-3 tablespoons of peanut butter and 12 oz of coffee. 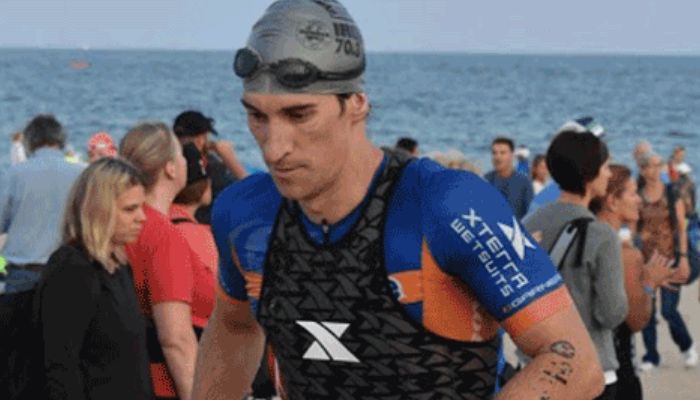 Upon arriving at the race site and transition area, I sipped on a little bit of water but didn't consume anything else prior to the race start. Sometimes when it is warmer or more humid, I'll drink some custom run blend but I didn't feel the need to do that on this morning. The temperature was pretty perfect race morning in the mid-upper 60's. And with our wave starting at 6:45 am (before the sun had officially risen), the temps stayed nice for a while.

The swim was really choppy and made for a slower than normal swim. I came out of the water in 31:00 and was with a handful of other pros. My first thought when coming out of the water and seeing the time was that we were probably the last 4-5 pros but after making it up to the transition area and seeing at least 10 bikes still there, I was excited to be sitting in the middle of the competitive pro field.

Onto the bike, I got settled in and was feeling good. There were a few other guys around me initially and then ultimately about 4 other guys that I could see up the road that I was trying to keep in sight and real in. I came through the first 5 mile split in about 12:30 and then started seeing several sub 11:30 splits (12:00 per 5 miles = 25 mph so I was comfortably riding 25+ mph). My heart rate was staying nice and low in the mid 120's to upper 130's for much of the ride.

My nutrition on the bike was as follows:

In the first hour, 1 serving (2 scoops) of my Colin's Endurance Blend - 2g PRO mixed up in a 21 oz INFINIT bottle that I transferred into my aero bottle before the race started.

This blend has 320 calories, 78 grams of carbohydrate, 2 grams of protein, 1,000 mg of Branched Chain Amino Acids (BCAA's) and 379 mg sodium along with the other electrolytes potassium, calcium and magnesium. This blend is watermelon with a flavor intensity of 6.5/10 and does not have any caffeine. It also has beta-alanine added to it to help fight off any lactic acid build-up that might occur during the race due to any surges in intensity/power/heart rate.

Getting Ready for T2

For the rest of the ride, I had the INFINIT 27 oz bottle located on my downtube of the bike and instead of having just 1 serving in that bottle, I had 1 + 1/3 of a serving (2 + 2/3 scoops) of my Colin's Endurance Blend - No Protein. Since it has an extra 7 ounces of volume, that is equivalent to an extra 1/3 of a serving or 20 minutes worth of nutrition. So I converted the 27 oz bottle into an 80 minute bottle instead of the standard 1 hour bottle still keeping the perfect osmolality of the blend.

The nutrition in this blend is exactly the same as the blend I used during the first hour other than the protein being taken out which results in the calories being slightly lower at 312 calories per serving. The reason I decided to take the protein out for the back half of the bike is to ensure that when I get to the run, I won't run into any GI issues. 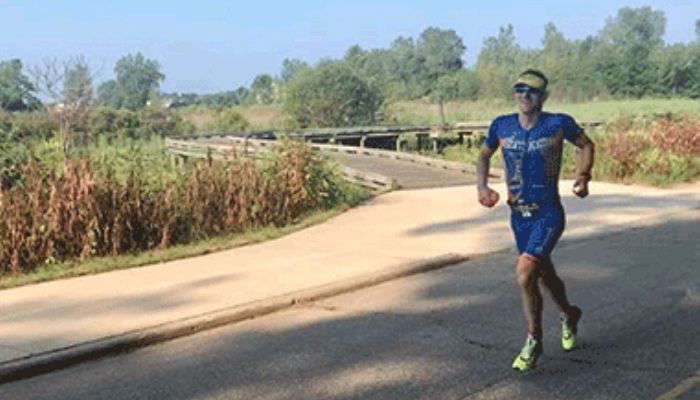 This took some experimenting to get dialed in and figured out, but I am really happy with this nutrition plan for the bike portion of a 70.3. I do like having that little bit of protein in my first hour just to ensure that I don't get hungry toward the end of the bike or while on the run. With my overall bike time under 2.5 hours and overall race time under 4.5 hours, I wasn't getting hungry and felt like the extra protein wasn't needed.

I finished out the bike strong coming in in a new 70.3 bike leg PR in 2:11:18 (25.6 mph). I quickly got through T2 (fastest T2 in the field!) and out onto the run. The run heads out about 1 mile and then up a decent hill, then does 2 loops before heading back down the hill to the finish. There's one additional short steep hill on the course (2 loops = 2 times) and otherwise is rolling with a few ups and downs. It was definitely starting to warm-up by the start of the run, into the upper 70's and into the low 80's, enough where my heart rate quickly jumped from the 130's that I averaged on the bike to the 160's for pretty much the entire run.

For my nutrition on the run for a 70.3, especially when I know it is going to be warmer, I have decided to use INFINIT Tripwire instead of my custom RUN/SPEED blend. I like that the :TRiPWIRE is higher in sodium and electrolytes so there's absolutely no need for extra salt pills or salt supplements and it also has the ability to help with cramping, which can sometimes occur coming off of a 56 mile bike. 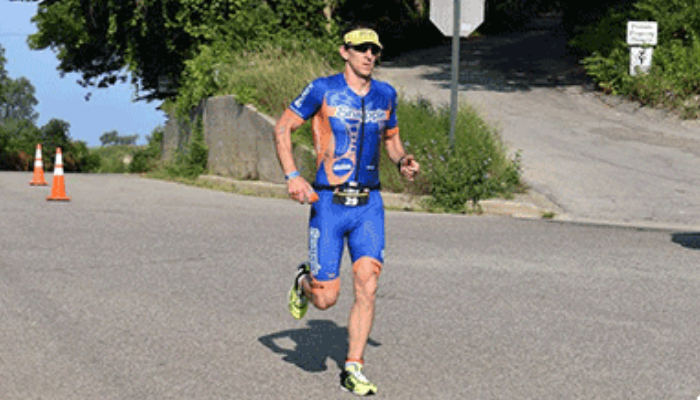 I had passed one guy fairly early on and then was holding steady for much of the run. I got passed by one guy right around the halfway point who I was unable to hang with which dropped me to 14th in the pro field. Once I made it up the steep hill on the 2nd loop, I knew there were about 2 miles to go which were going to be mostly flat or downhill along with the big downhill back toward transition. I was targeting a 1:25 half marathon run and knew with a strong last 2 miles I could get close to that. I picked up my pace and ended up passing two more guys over the final mile, finishing the run in 1:26:00 (6:35/mi), a new 70.3 PR of 4:12:14 and a 12th place Pro finish!

This race was a huge step in the right direction for me and gives me the confidence to keep training hard for whatever is next (which is still undecided). 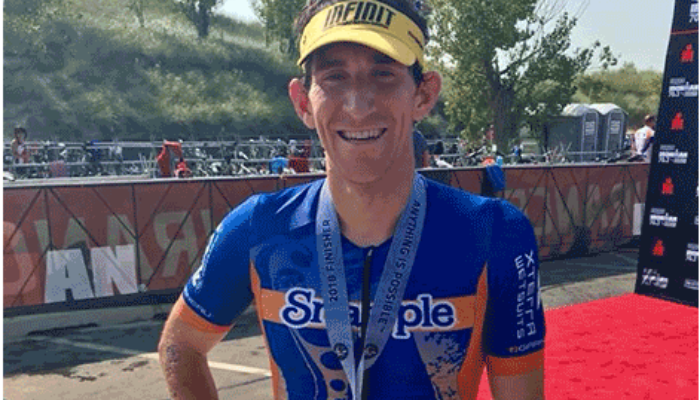 My nutrition for this race was SPOT ON! I never felt depleted or low on energy, no muscle cramps, and no GI issues. Sure the run was tough and I was getting tired, but that's expected after 4 hours of racing. Just remember, that just because this was my perfect nutrition plan, doesn't mean this is the perfect plan for you. Everyone is different, has different needs and is on the course for different amounts of time.

If you'd like to review your custom blend(s) or get help making a new custom blend, we are here to help! Click here to schedule your free consult.