INFINIT is continuing our #MyMIX - Frankie's Formulas, a series of race formulas specifically for the EU Spring Classics that Frankie raced for over a decade. Including insider stories about what actually happens in the peloton, the race conditions, terrain and and the custom-blended nutrition solution needed to complete the stage.

“Mental focus, clarity, and concentration are key after racing 280km and if you’re low on energy mistakes will happen. It’s not only about having the right fuel but in a seven hour race hydration plays just as an important role. It’s also important to consume something you trust and know and not rely on hotel eggs.”

It’s the first one day classic of the World Tour, and at 293km, it’s also the longest. If you add the neutral zone the race goes well past 300km. With a start at 10am it’s important to have a good breakfast and important to fuel up right before the race start. Milan San Remo, despite the distance, is known for having a very quick start. Usually on average it takes an hour for the break to establish itself and it’s not uncommon for the fast racing to last up to two hours. At speeds of 30 mph it takes a while for the right group to escape and for the field to grow tired of chasing everything down. 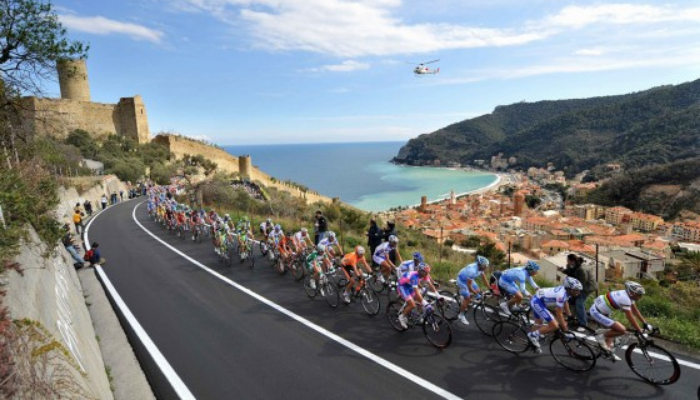 I’ve had days go well and go bad at Milan San Remo. Normally my job was to set up the leader of the team before the final two climbs. Usually after heading a team lead out that would last for ten or fifteen kilometers I would get dropped from the main group. I sometimes made it over the Cipressa with the first group but I never made it over the Poggio with the leaders. This isn’t so bad considering the one year when I ate a bad breakfast. Every year breakfast was usually the same. I would have some pasta, eggs, rice, bread, coffee, and cereal. On one particular race day everything was fine until about 30km into the race when my stomach started grumbling. Not from hunger but I believe it was from some bad eggs. The rumbling turned into major digestive problems where I wasn’t thinking about racing anymore but on how to fix the problem in my stomach that was determined to get out. Thankfully, the break had established itself and the pack was riding at a tempo speed instead of its usual flat out hang on at all costs speed.

It takes skill to do things on the bike and sometimes we don’t see everything that takes place. Where incredible bike handling becomes more evident for everyone to see are on the descents of the Cipressa and Poggio when everyone is fighting for position and trying to win the race. The descent of the Poggio, the last 10km of the race, is twisty, curvy, and extremely fast. It’s one risk after another as the riders fly downhill trying to drop each other going from one edge of the road to the other edge of the road.

Mental focus, clarity, and concentration are key after racing 280km and if you’re low on energy mistakes will happen. It’s not only about having the right fuel but in a seven hour race hydration plays just as an important role. It’s also important to consume something you trust and know and not rely on hotel eggs.

Posted in Team INFINIT, Athlete Spotlight and The INFINIT Library